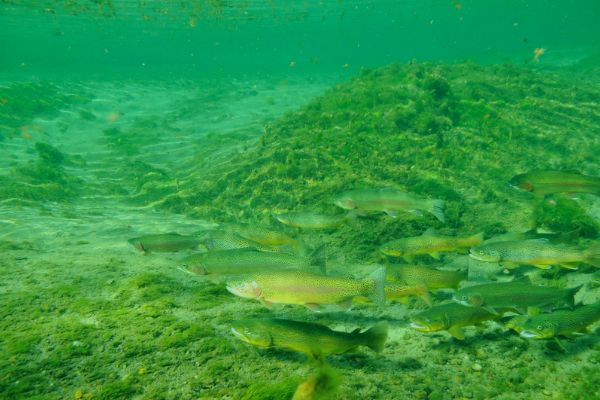 Trout are not bottom feeders like carp or catfish. But, they do feed predominantly near or just off the bottom. Trout prefer to wait and cruise in the bottom 2-3 feet of water to intercept any food that drifts by.

When trout fishing, it is quite easy to develop the opinion that trout spend a lot of time eating insects close to the surface. After all, the rings of a rising trout are often the most visible to an angler.

The reality is quite different, and trout spend relatively little time feeding close to the surface. In most fisheries, the trout we see make up a tiny portion of all the trout in the water.

Some people estimate that trout only feed on the surface around 10% of the time. With an additional 10% of prey taken just below the surface.

This means trout get approximately 75% percent of their diet on or near the bottom. The bottom is where most of their food lives and grows. At certain times trout even dig into the sediment and suck up exposed insects.

While trout spend the majority of their time feeding near the bottom. They certainly watch their surroundings and will rise higher in the water column to grab a suspended morsel. They are not true bottom feeders like catfish that spend their time digging through the sediment.

Do trout feed on the bottom?

Trout typically feed close to, or just off the bottom. I have read that about 75% of a trout diet is taken near or on the bottom.

At times trout do suck caddis larvae, mayfly nymph, and snails right off the bottom. Just like a bonefish, trout will bury their nose into the sediment to dislodge a meal. I am also certain they will grab any worm that peeks too far out of their holes.

In rivers, trout eagerly eat any crayfish they catch out in the open. Probably more so at night than during the day. I once watched, several brown trout in an estuary patrol a shallow flat consuming small mud crabs right off the bottom.

Trout also feed upon juvenile freshwater mussels, clams, and other mollusks. In some waterways, trout and mollusks share a symbiotic relationship. The trout eat the mussel spawn, which then attaches to the trout gills and hitches a ride to other parts of the lake or river.

Below is an excellent video that shows a rainbow trout digging into the sandy bottom in search of a meal.

Factors that determine the feeding depth of trout

Water temperature is a big one. Trout are cold-blooded, when the water is cold they slow down, become sluggish, and rarely feed. When the water is too hot, they struggle to get enough oxygen so again they stop feeding.

Trout, try to seek out water within their most comfortable range. In warm summer conditions, trout often seek deeper water, because it is colder. In the winter, trout often move onto shallow flats because they are warmed by the sun.

In both situations, the trout still generally feeds close to the bottom, just in different depths of water. In very deep lakes, they might suspend off the bottom, especially when they are feeding upon plankton, krill, or plankton.

When temperature allows, trout are likely to go where the food is the most available.

When the mayflies or caddis are hatching, you will find many trout feeding close to the surface. Likewise, they will surface feed when wind blown terrestrial insects are common. They follow the food to the surface.

In general, unless there is a hatch occurring, or a windy summer day. Trout have little reason to feed close to the surface. Simply because there is not much food there. During that time, there is a lot more food on the bottom, or clinging to weed beds. So that is where the trout will spend their time.

Trout feed is where the food is the most abundant.

Trout are lazy fish. They much rather wait for food to come to them than spend energy chasing after it.

So in rivers and streams. Trout prefer to feed where the current brings food directly to them. But, trout are lazy fish, they prefer to wait just out of the main flow.

So in rivers and streams. Trout often feed close to current and moving water. Even in flowing water, trout usually wait close to the bottom where the current is slower. There they can wait while using minimal energy, only moving to intercept morsels as they drift by.

I have also noticed, the faster the water, the deeper the trout often hold. Right at the head of the pool, trout often position themselves tightly against the bottom.

While further downstream where the current is slower, the trout might be hanging midwater more actively drifting side to intercept morsels as they drift downstream.

Trout feel safer when they are close to the bottom. The thick layer of water overheads provides ample protection against surface predators like eagles and bears.

What do trout eat from the bottom?

How deep do trout feed?

Trout spend most of their time in the shallower parts of the lake, that is because the shallows receive more sunlight and other more biologically active. This means, wherever the sunlight can reach the bottom there is more food.

This does not mean that trout can not survive at much greater deeps, both brown and rainbow trout have been recorded living as deep as 650ft while Lake trout live down to 1300ft. Although, at these depths, they likely feed on zooplankton in the water column and vertebrates that live on the lake floor.

While trout can live hundreds of feet down, that does not mean they are worth targeting down there. In warm water, summer conditions. Trout typically live around the thermocline, which depending on the lake can be around 50-60ft below the surface.

At cooler times of the year, trout typically move into the shallows, sometimes even as shallow as a foot or two of water.

Is it possible to catch trout feeding on Snails, Clams, or Mussels?

I have caught trout full of snail shells and seen photos of trout full of small clams. So it is certainly possible to catch trout that are feeding on them. In both situations, the trout were caught on more traditional fly and spinning patterns.

I have never seen anyone tie a mussel fly, but I know both Snail and Clam flies exist.

Snail flies are certainly a part of some trout fishermen’s arsenals. I personally find any chubby round dark fly makes for a reasonable snail imitation.

I have not heard of anyone targeting trout with a clam fly, they seem to be more the domain of Carp fishermen. But, in lakes with large populations of freshwater clams, they are probably worth a try.

Spin fishermen have two options. They need to decide whether they want to try and replicate the natural prey of the trout, or just throw something obnoxious and hope they get a reaction.

If they want to try and “match the hatch”, I suggest fishing a worm pattern on a ned rig could be quite effective. The advantage of the ned rig is that it sits on the bottom and the worm just wiggles there.

Another option is to use either a split shot or a drop shot weight to cast out a selection of nymphs and try to present them in the path of the fish. I slightly prefer the use of split shot, while more difficult to cast, it does make for a smaller splash that is less likely to spook trout.

There is always the option to fish a large lure or spinner. If crustaceans are plentiful, a crayfish imitation can be effective. Just need to slowly work it along the bottom. If fishing in a tidal area, then consider fishing a crab lure in a similar fashion. Just try and match the size, and general appearance of the crustaceans where you are fishing.

Finally, it is often possible just to fish a normal lure such as a spinner or jerkbait, and hope the trout is willing to give chase. While trout spend a lot of their time feeding close to the bottom, they are constantly monitoring their surroundings. So other presentations can work.

Trout spend the majority of their time feeding on, or close to the bottom. This is the preferred feeding location for several main reasons, but for the most part, it comes down to food availability, temperature regulation, and avoiding the strongest currents. The best time to go trout fishing is determined by the water temperature. In hot weather, it is best to fish early in the morning or the evening. While in the winter, trout usually only start to feed after 10 am or when the water starts to warm. At times trout can be sluggish will…