Productive spots over the summer might seem dead during the winter. It might not just be a streak of bad luck, trout often move between home ranges. They have separate summer and winter home territories.

In this guide, I will share my knowledge of where both stream and river trout go over the winter months and the reasons for the migration. Knowing where the trout are makes them a lot easier to catch.

Where do river trout go during the winter?

Water temperature and ice cover are two driving force behind the movement of trout over the winter months. In the winter, trout often relocate from their summer homes in areas of cooler water and greater flow, to deeper slower flowing parts of the river. When trout fishing during the winter, it is best to concentrate your efforts on the deep holes, rather than the shallow ripples and runs.

There was an interesting study researching the movement of large brown trout in the Au Sable River, Michigan (link). The researchers found that the large brown trout which they tracked had summer and winter ranges.

During the summer, the trout home range was in a colder, shallower part of the river with good spawning substrate. After spawning, most of the monitored brown trout traveled 10km upstream to a deeper, slower part of the river where they spent the winter. This winter habitat was widely considered to be marginal for trout over the summer due to warmer water temperatures.

Although, different studies (1, 2) following brown trout movement in an Appalachian stream and the Clinch River, Tennessee found that these brown trout did not have different winter or summer home ranges despite stressful water temperatures at times.

Winter storms can at times bring a lot of rain to trout fisheries often resulting in floods. These floods can displace trout several miles downstream. Trout living in gorges, or other confined watercourses are most vulnerable to displacement.

Brown and Rainbow trout do behave differently in flooded rivers. Brown trout are more likely to try and get out of the current, either sheltering in the shallows or beneath rocks. While Rainbows often try and ride out the flood fighting against the flow.

If trout are displaced, they usually accumulate wherever the river flow slows. This could be a large deep pool, or even a lake. So after a flood, trout are more likely to be found in slow moving parts of the river. Given time, they are likely to work their way back upstream.

I have even seen rainbow trout caught several miles out to sea, although it will be impossible to know if they were washed there or were simply following the floodwater. I know these were Rainbows and not Steelhead because they were caught in a country where anadromous rainbows/steelheads do not exist.

Trout can swim over 60 miles during the spawn!

All species of trout try to migrate to spawning streams. The exact time they decide to do so varies based on species and also river conditions. Some trout will travel many miles to find the perfect redds, while trout resident to the spawning streams might not have to leave their pool.

Broadly speaking, Brown Trout and Brook Char spawn in the fall, while Cutthroat and rainbows spawn in the spring.

Rainbows are known to delay their spawning if the water is still too cold, which means trout that live in the high mountains usually spawn later than the ones living towards the coast.

So during the spawn, where do the trout go? Well. The trout leave the larger rivers, ponds and head towards the smaller tributary streams. The speed at which they travel does vary, but it is usually somewhere between 300 yards and 3 miles per evening.

How far the trout travel does vary greatly. I have known trout which spawned within yards of their home pool. While other trout have been documented traveling only 60 miles to reach their spawning grounds.

These trout will continue moving upstream until they reached their spawning water, or if their path is blocked by some obstacles. These obstacles can either be man-made, such as a poorly constructed dam, or natural such as low flows.

In these situations, trout often mass in large numbers just downstream. I have counted over fifty Brown Trout waiting beneath a poorly planned hydroelectric weir. It did have a retrofitted fish ladder which the trout seemed to ignore.

Others places trout are likely to wait is at the mouth of the spawning streams. In times of low flow, the trout might decide to wait at the mouth before pushing upstream to finish their spawns. Such trout at times can wait several weeks for the ideal conditions.

When in the spawning streams, the trout seek out clean gravel in the shallows. Usually in areas just beside the main flow so there is plenty of current to keep their eggs aerated. There the trout will partner out, the hen will lay her eggs and the dominant males will get to fertilize them. After spawning, brown trout do not stick around for long. Researchers have found that “brown trout returned to their pre-spawning locations within a few days after spawning (source)”

After spawning, the trout will start to drop back downstream and to put on condition. A few trout stay behind, maybe to feast on the eggs or simply because they lack the energy for the return trip. Few things are more annoying than a dry fly that refuses to float. So let’s discuss the best ways to keep your dry flies floating high and dry, and hopefully catch more trout. Fly floatants The most common way to keep a dry fly floating is by applying a water repelling coating which are typically… 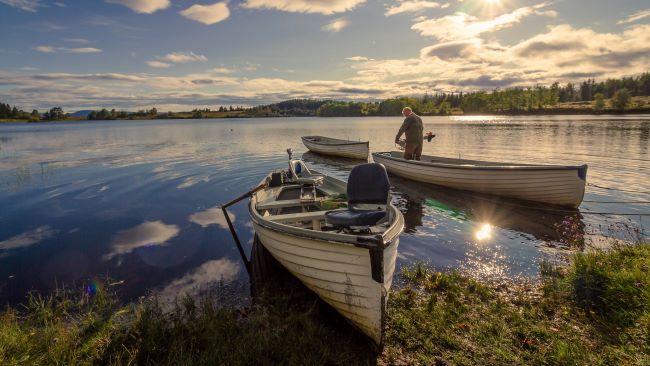 The use of gloves when handling trout is very controversial to say the less, like many fishermen I have seen photos and videos of badly injured trout with visible ‘burns’ or ‘fungal’ marks in the exact position a person holds a trout. I have also seen wild trout with palm size fungal marks sulking in…