Trout fishing can be a lot of fun, and a very rewarding pastime, but it can be challenging.

If you’re new to trout fishing, I have listed a few of the most common mistakes I see new anglers perform while out on the water. With a little care and knowledge, all of these mistakes are easily avoidable. I will provide one bonus mistake here. If fishing with a spinning reel, the reel faces down. Do not hold it on the top of the rod.

So I will list the common mistakes here, then expand on them in the article below.

Keep moving, do not flog just one spot.

One of the biggest mistakes I see new anglers make is that they stand in one spot and keep on casting. If you are not catching or seeing feeding trout get moving. Even in the ‘hottest’ of known spots if I am not catching I will not spend longer than 10 or 15 minutes trying the same location.

New anglers often do not cover enough water. Some days I will walk over 15 miles when spinning, slightly less if fly fishing. The more water I cover the more likely I am to catch fish.

The reality is, the first cast is the most likely to catch a trout. If you had a follow, then nothing. That trout is spooked and is not going to show its face again for a while. Yes, it is possible to throw your entire tackle box at it but it is unlikely to show interest again.

If you do have a follow, by all means, make a few more casts, and cover the rest of the pool but don,t spend all day there. Move on, you can always revisit the pool on the way home for another chance. By then the trout will likely be out again.

It does not matter whether you are fishing in a lake or a river. Move to where the trout are, do not wait for them to come to you.

It is much better to keep moving and cover as much good looking water as possible. One cast to ten potential trout is more productive than ten casts to one trout.

Okay, there are a few exceptions. If you are targeting trout during their spawning migration. It might be worthwhile to camp in one location.

Trout fishing is not a race, retrieve slowly.

Trout like to inspect their food before striking. So a slow retrieve is nearly always more productive than a fast one.

Spin anglers are more guilty of this than fly fishermen. They simply wind in their reel too fast. Trout are not high-speed hunters, they are lazy fish that just cruise around after an easy meal.

Often a retrieve every so faster than the speed of the current is all that is required. It is the same when trolling, I paddle very, a stroke every 5 or 10 seconds. Give the trout plenty of trout to inspect and strike.

Try to avoid water which others have just fished.

Trout are naturally wary fish. If someone has already fished a hole or stretch chances are the trout will be spooked or laying low.

An experienced angler might be able to pull a few out with precise presentations, but it is an uphill battle to fish in the footsteps of others.

One exception is in heavily stocked fisheries. Stock trout are at times released in such thick concentrations and they are so tame that they are less likely to stop feeding once fished over.

A complementary point. When arriving at a fishing location, try and avoid other anglers, do not make a beeline straight to them, and fish in their shadow. Too often I see other fishermen gravitate around the first person to a fishing location. It can be even worst when lake fishing from a boat.

Sure, keep an eye on them from a distance, and if they are pulling in fish after fish it might be worth moving in closer, but in all other situations find your own spot to fish.

Fish your feet and cover the shallows

When I first started trout fishing, I would often just cast as far as possible, hoping for the best. This approach caught a few fish but would spook many trout close to the shore.

It turns out that trout often feed in very shallow water right next to the shore, so always cover the shallow water first before fishing the middle or far side. I also try to sight fish, any trout holding in the shallows. A good pair of polarized glasses helps a lot.

If you go straight for the distance cast, chances are you will cast over a lot of potential fish and the disturbance from the line is enough to spook them.

The drag should be set to about 1/3rd the lines breaking strain.

I see this far too often when out on the water, and many experienced fishermen are guilty of it. Many even winch their trout in rather than fight them.

They set their drags much too tightly. There is a basic rule of thumb, that the maximum drag pressure should be set to about a third of the lines breaking strain. So if you are fishing 6lb line you really only need 2lb of drag.

So, what are the drawbacks of too much drag pressure? Well, trout have fairly soft mouths, if you fight them too hard you can pull hooks out. Fishing too much drag can also result in damaged tackle, cheap hooks can bend, and some budget reels can flex causing a jerky retrieve.

A tight drag is a tool of last resort, not something to be fished all the time.

This one mostly only applies to spin fishermen. I often see people fishing too heavy line. They might arrive to the river with their reel spooled with 12lb or 20lb line.

The problem is, trout can not only see our fishing line, they can also sense the disturbance it makes through the water. The thinner diameter of the line the less visible it becomes to the trout.

For most river and stream trout, I fish no heavier than 6lb. That includes braid, I have seen people recommend using 20lb or 30lb braid because it is the same diameter as 6lb monofilament but that is just a disaster waiting to happen. Heavy line, combined with maximum drag will destroy most ultralight tackle within a few seasons of use.

If you want to know a good quality thin braid, then I recommend using fireline, I explain why in this article.

Well, above I listed 6 of the more common mistakes I see new fishermen do on the trout river. Many of which will result in fewer trout caught.

For more advice and hints on catching trout, I have an older post here that covers many more reasons why trout might be hard to catch. 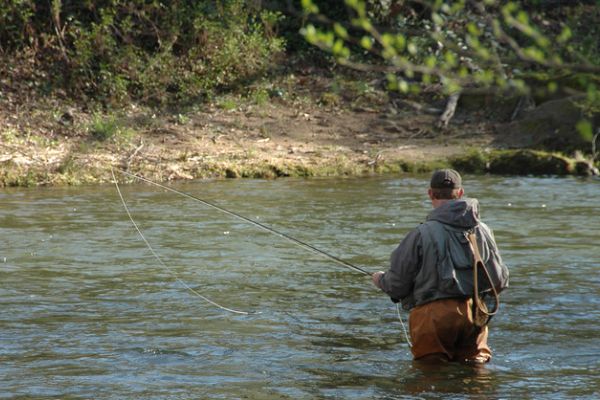