I often see things that annoy me while out trout fishing. In this post, I will discuss 9 of the most annoying things I see other fishermen do.

One of the worst things I see out fishing is mishandling of fish. It does not matter if you plan on keeping or releasing your catch, fish still deserve to be treated with respect and kindness. They are living creatures afterall and there is no benefit in being cruel towards them.

All fish need to be treated with respect, even the annoying ones. Without fish we can not go fishing and the mosquito population will likely explode. Fish are an essential part of a helthy enciroment.

When releasing a trout, do so quickly and efficiently without prolonging the time they spend out of the water.

When you must take a photo, get the camera ready before taking the fish from the water.

It is also important not to unnecessarily prolong the fight. The fight might be fun and sporting for us, but the trout are fighting for survival.

All fish kept fish should be given a swift and painless death.

I have seen far too many fish, including trout left to slowly suffocate in the hot sun. I have no idea why so many people leave their fish flapping around on the bank to die a slow death. It is nearly as bad as the dead fish I see floating downstream which did not survive a release attempt.

There is no advantage in not killing a trout quickly, leaving them flapping around on the shore does not improve eating quality. The only purpose it serves is to be cruel.

There are many ways to kill a trout, one of the quickest and cleanest is to stab them between the eyes with a knife, then wiggle it slightly to mash their brains.

If you do not have a knife, give the trout a short, hard whack on the head. A hard hit not only stuns a wiggling fish but usually instantly kills them.

2) Jumping ahead of other anglers

Fishermen that jump infront of others on a river or beat really annoy me. No matter where you are fishing give other anglers space and do not interere in their fishing.

The more remote a location, the less apprioate it becomes to fish close to other anglers. Never drive to a remote river and then fish immediately in front of a fishermen already there.

In cases where some water must be shared, have a quick discussion with the angler already there and work out some sort of compromise. Usally an agreement can be made so everyone has a rewarding day on the river. Maybe one party will agree to fish upstream, while the other will head downstream. There are nearly always options.

On very famous and busy rivers try to leave ample room for other fishermen. On some rivers, it is more normal to share spots and pools but still try and work out some compromise and share the water.

Always be courteous to other anglers, and avoid fishing directly where they are. Do not cast over their line, or target the same fish they are.

Finally, if another angler is fighting a fish, keep your gear out of the way. They might have to follow the fish in either direction, so do your best not to block their path. Most importantly do not cast over a line while a fish is on it.

3) Leaving piles of trash, and nylon tangles behind.

This one is simple and is common courteousy.

Do not leave piles of trash on the river bank, this includes fishing line and beer cans. It might also include excessive amounts of corn used for chumming. I do not need to go into detail why leaving trash behind is bad.

If you have carried it in with you, you can carry it out.

It is also a good idea to carry out any trash you find while fishing. I have seen so many access points closed to the public due to people leaving too much trash behind. So it is in our interest to keep the rivers clean and tidy.

The same also applies to fish remains such as guts and frames. Dispose of them sensibly. No one wants to see piles of fish guts in the shallows and thrown into the streamside vegetation can attract vermin.

In areas nearer to town, it is probably best to pack the frames out. I like to freeze it and then turn it into chum for whenever I decide to go shark fishing. Fish frames also make great compost.

In more wilderness areas, It is sometimes permissible to throw the remains into deep water. There the local scavengers will slowly consume it. In other locations it is recommended to bury the remains in a shallow hole well away from the river bank.

This is another one that should be common sense, but which many people abuse which can result in vehicle access getting restricted or blocked entiely.

When driving to that remote fishing spot, stick to the formed roads and access tracks. Unless absolutely essential do not go driving off road creating new tracks.

Over the last twenty years, I have experienced many access roads closed to the public because of hooligans in their 4wd ripping up the environment. It often starts with one person driving a new route, and others starting to follow in the tire tracks.

Before long there are half a dozen tracks cutting across the landscape and sometimes it is just easier for the environmental protection agencies to ban all traffic rather than try and force everyone to stay on the original access road.

It might not seem like you are doing much damage driving along a rocky riverbed, but many endangered birds species nest in such areas, and not to mention frequent vehicle activity can speed up erosion.

Boat based anglers have much greater mobility than shore anglers, they can fish almost anywhere on the river or lake with relative ease.

Very often I will be fishing from the shore, only for kayakers or boats to anchor just offshore and attempt to fish the same water.

When fishing from a watercraft, it is best to avoid fishing just offshore from the land access points.

Boats have excellent maneuverability, unless it is a very unique or iconic location such as a river mouth it is usually a good idea to fish somewhere less accessible from the shore.

The fishing is also usually better when the access is more limited.

I really don,t understand why some people will paddle for half an hour only to fish opposite the road access. The section of shore with good road access is famous not because the fishing is great there but because the accessibility is easy.

There are usually many better spots accessible from a boat. Find them.

Time and time again I have seen it, a boat will be fishing some generic spot along a generic piece of shore. Before long, they will be joined by multiple other boats.

I understand some anglers have no idea where to fish, but the best place to fish is not right next to another boat. Give other boats as much space as possible.

When someone is fishing in the middle of nowhere, they are probably fishing there for the solitude. Do not join them.

Even on very busy lakes, try and stay outside of casting distance of another craft.

Equally as important, on busy lakes. Learn to share, and try not to hog an entire shoreline to yourself.

8) Judging other anglers for their chosen methods or target species.

Trout fishermen and fly fishermen in particular can be quite elitist. They often have strong opinions that their chosen method of fishing is the best, and all others are subservient or beneath them.

In reality, if the regulations allow for it. No method of fishing is any better, a spin or bait fisherman has as many rights to fish a stream as any tweed wearing dry fly purist.

Some even place trout on a pedestal above all other species. I have even seen some anglers throw ‘junk fish’ onto the bank.

No, trout are not the most important fish in the river, and unless you are fishing in Europe it is highly unlikely that the brown trout you are fishing for is actually native.

Those tiny sunfish that keep taking your lure are probably native and have more rights to be in the stream then that recently stocked 12” brown. If the ‘pest’ are indeed an invasive species, and regulations say

9) Us fishermen do not have more rights than other water users.

If you are fishing a river, where people swim you do not fish between and around them. The fishing next to them probably sucks anyway. Walk a little further upstream and avoid fishing around swimmers.

On a similar note, and this time targeted at fly fishermen. If there are children and pets running around all over the place. Maybe cease with the backcasts. Really great way to create drama by hooking a kid in the eye. Move somewhere less busy or just stick with roll casting.

If swimmers are in the water, the trout are probably sulking near the bottom anyway. So it is not worth the effort. 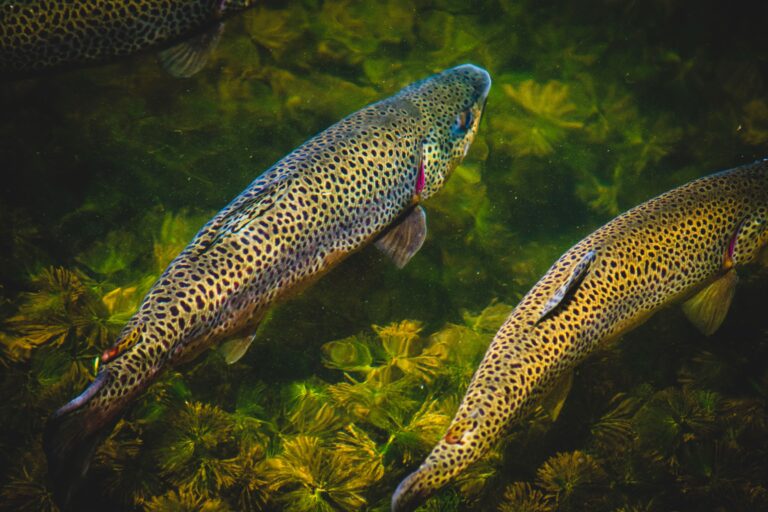 This might seem like a simple question, just check the IGFA records. Well, it is not quite that simple, because the largest trout are not always caught on rod and reel. The largest Rainbow, Brown, Brook, and even Lake Trout are quite well documented. But these are far from the only trout. In this article,… I love fishing; I love trout, and my favorite type of fishing is fly casting to sighted trout. The thrill and rush of adrenaline as a sighted trout glides across, opens its mouth, and slowly engulfs a fly keeps me returning to trout rivers day after day. I feel there is no fishing more rewarding… When most of us think of Hawaii, we think of tropical beaches, palm trees, lush jungles, and surfing, but Hawaii is more than just a beach Paradise. There are volcanoes raising over 13000 feet, where it gets cold enough on the summits to snow most years. The largest of the volcanoes is on Big Island,… The weather was absolutely brilliant today, but I was stuck at home waiting for family to visit in the afternoon, so I decided to sneak out for a short ride, as I was powering home, my chain momentarily got stuck and I slammed my toes directly into the asphalt. The pain was immediate, but it…